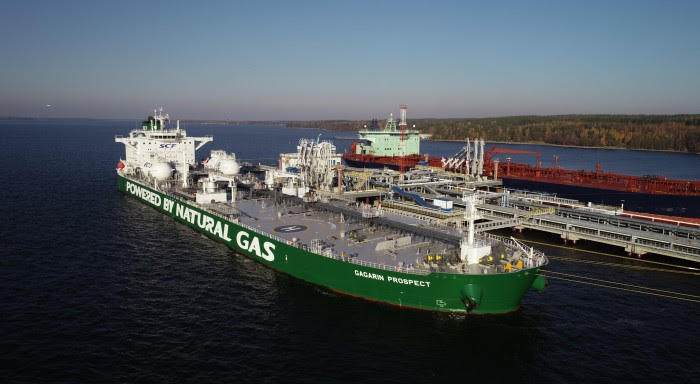 On 22 October 2018, Sovcomflot crude oil tanker Gagarin Prospect, operating on LNG fuel, successfully completed her voyage across the Baltic and North Seas from Primorsk to Rotterdam where she safely delivered a cargo of 104,815 tonnes of crude oil. For the pioneering vessel, it marked her first export delivery of Russian crude oil under a long-term time-charter contract between SCF and Shell.

Gagarin Prospect is the world’s first Aframax crude oil tanker designed to operate on LNG as the primary fuel. She is the lead ship of the next generation of tankers, which will set a new standard of navigation safety and quality. Switching to cleaner-burning LNG fuel allows Sovcomflot to significantly reduce its impact on the natural environment. This is particularly important for ships in high-traffic areas such as the Baltic and North Seas where these ‘Green Funnel’ tankers will primarily operate.

Sovcomflot is gradually switching its conventional tanker fleet from traditional heavy fuel oil to LNG. This is to reduce its environment footprint and to comply with tightening sulphur and nitrogen oxide emissions regulations, including the IMO’s global 0.5% sulphur cap, which takes effect in 2020.

Gagarin Prospect was delivered to SCF in July 2018.

In September 2018, Sovcomflot has placed with Zvezda Shipbuilding Complex orders for a series of two similar LNG-fueled Aframax tankers, both of which will then be time-chartered to Rosneft for 20 years each.

On 2 October 2018, the inaugural LNG bunkering of Gagarin Prospect took place at the Port of Rotterdam, and on 15 October, the vessel loaded its first export cargo of Russian crude oil at the Port of Primorsk.

On 18 October 2018, an event was held in Rotterdam to mark the success of the ‘Green Funnel’ project and the start of the successful operation of the tanker. All companies that were involved in this project were represented at the event.

The second tanker in this series, Lomonosov Prospect, was delivered to Sovcomflot in October 2018.

Sovcomflot expects to have six such LNG-fueled Aframax tankers in operation by the beginning of Q2 2019.