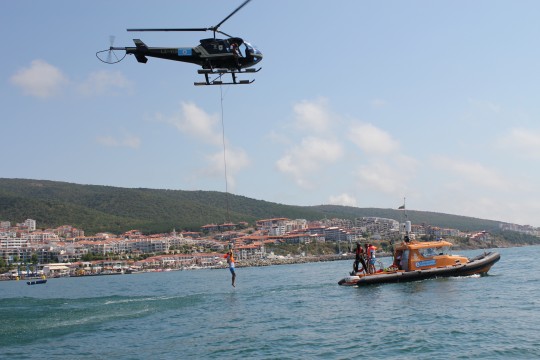 Shore-based shipping industry employees around the world feel slightly more positive about their employment prospects and are less likely to seek new positions in the near future according to research conducted by leading international maritime recruiter Halcyon Recruitment and online training provider Coracle. Just over half (56%) of the (2,863 respondents) indicated concern over job security whilst only 28% said that they were considering a job change in the next 12 months. This compares with the findings of the 8th Maritime Employee Survey published in late 2016 which found that 63% of employees were worried about job security and 37% were considering a change of job.

“The results this year reveal more positivity within the shipping industry as a whole. Whilst there is nothing to suggest a dramatic increase in the number of jobs on the market, shipyard order books are healthier than they have been for months, secondhand vessel sale & purchase activity is up and there is more positive sentiment in the freight markets. This will be likely to have a trickle effect in new positions being created over the next 12-24 months. Interestingly, the results highlighted the ongoing lack of promotion and advancement opportunities – not helped by the flat organisational structure in many companies – as the leading reason for discontent.”

The report this year looked at the potential impact that the UK’s impending exit from the European Union will have. Heidi Heseltine observed:

Responses to the much-anticipated survey were drawn from all the key maritime centres and included respondents representing all the major trades working in both commercial and operational roles. The research was undertaken between July and November 2017.

Other key conclusions from the report include:

37% of respondents have received a salary increase and 47% have received a bonus in the last 12 months (both only slightly down from 2016 with the results showing 38% and 49% respectively);
Those working in the dry cargo sector are faring best with 44% receiving a salary increase and 52% receiving a bonus;
The tanker segment employees also did well with 52% receiving a bonus however only 35% reported a salary increase;
70% of respondents are happy with the bonus they received this year, which has increased from 69% in 2016;
Those working in the vessel operations and technical/HSEQ markets were hit the hardest with only a third of respondents in each of these sectors receiving a salary increase;
77% of respondents will go to specialist maritime recruiters when considering a job change before considering other avenues such as LinkedIn, Facebook, etc.
The relationships that individuals have with their line managers is the area employees are most content with, with 53% respondents putting this first;
Only 48% of respondents work for employees that provide, pay for or encourage training and personal development;
45% of employees cited lack of promotion and advancement opportunities as the leading reason for dissatisfaction in their current role.