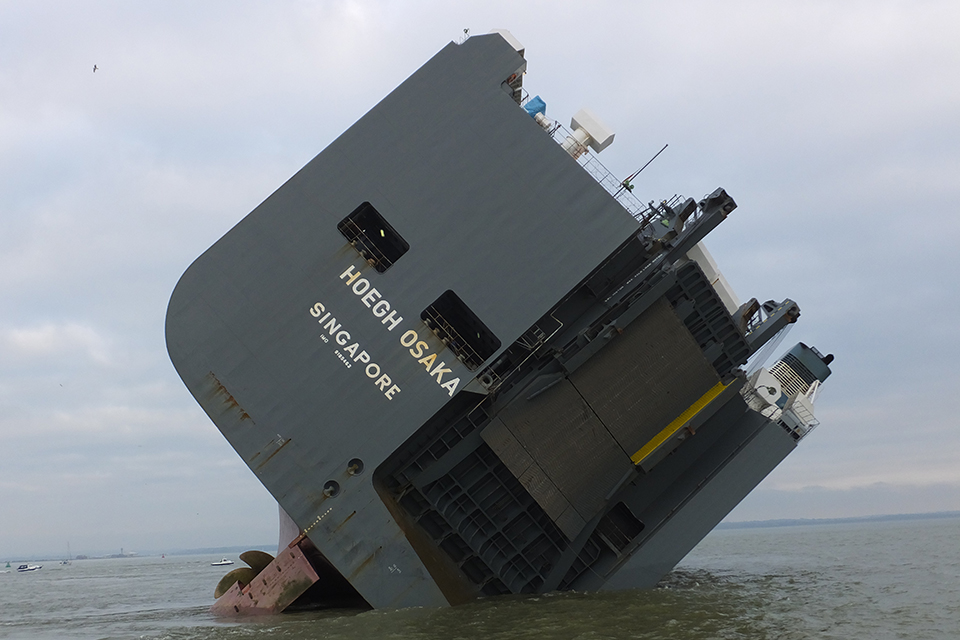 The Singapore registered pure car and truck carrier (PCTC) Hoegh Osaka was departing Southampton, UK, and turning to port around the Bramble Bank when the ship developed a significant starboard list. As the list increased in excess of 40º, the ship lost steerage and propulsion, and subsequently drifted aground on Bramble Bank. A cargo shift as the ship listed resulted in a breach of the hull and consequent flooding. All crew were safely evacuated from the ship and surrounding waters. There was no resulting pollution, and the ship was later successfully salvaged.

Stability modelling and analysis following the accident show that Hoegh Osaka listed heavily to starboard while turning around Bramble Bank as a result of having inadequate stability, which had not been identified prior to departure.

Safety Issues
Assessing a ship has adequate stability for its intended voyage on completion of cargo operations and before it sails is a fundamental principle of seamanship that must not be neglected
A loading computer is an effective and useful tool for the safe running of a ship. However, its output can only be as accurate as the information entered into it
It is imperative that working practices enable correct information to be provided and that sufficient time is made available before departure for an accurate stability calculation to be completed
An accurate stability calculation before departure is fundamental to safety