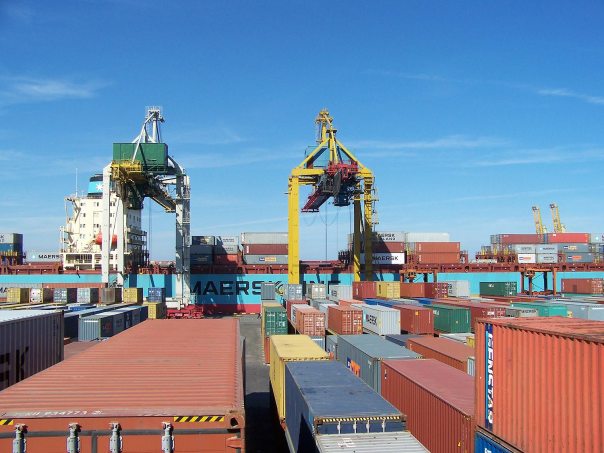 The laden turnover increase was in Bulgaria and Romania. In 2015 Ukraine, Russia and Georgia suffered 26,10%, 13,00% and 13,24% drop of laden container turnover respectively.

The top-five container terminals of the region in 2015 changed their positions in total volume handled: DPW (Constanta, Romania) still was on the first place, APMT Poti (Georgia) still was on the second place, NLE (Novorossyisk, Russia) moved from the third to the fourth place, HPC Ukraine (Odessa, Ukraine) moved from the fifth to the third position and NUTEP (Novorossiysk, Russia) moved from the fourth to the fifth place. All of these terminals except DPW (Constanta, Romania) suffered volume drop in 2015 compared to 2014.
Black Sea Container Terminals shares by total turnover, 2015

Also it has to be mentioned that in 2015 there were some structural changes of the Black Sea container market. For example, WHL and KLINE suspended their activity here, while CSAV merged with Hapag Lloyd that is why CSAV volume significantly decreased at this market. At the same time a new player had entered the Ukrainian container market – TURKON Line, which is a well-known player on the Mediterranean – North American trade. Entering this market on a slot agreement basis with Admiral Container Line, TURKON Line will try to find an opportunity to grow business based on the growth of Ukraine – USA trade.